Life has been more manageable since the end of January. The long weekend in March was a bit full on. At one stage we had the carpark full of boats and caravans .

We are preparing for the Easter break and the school holidays.

We are still waiting for the zoning to be changed but in the meantime we have been working on plans for the new building.

The veggie garden has been consistent and we are now getting a selection of produce on a regular basis.

The cherry ice cream has been very popular.

The patch of Naked Ladies made a wonderful show in the carpark and lasted for a week or two brightening things up.

The gardens around the shop are also in full bloom making a pretty picture. 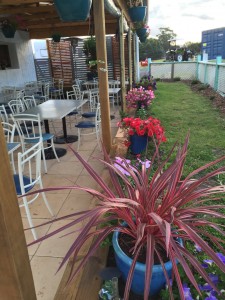 We have had a number of helpers over the last few months. Tom had a short visit with us and was a great help. 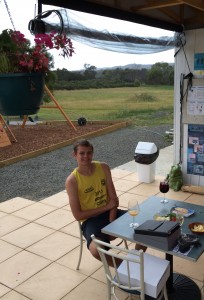 Our friend Eric used here as a base for his trekking around Tasmania. Every time he came back to us he helped with the veggie garden. We started to call it Eric’s garden lol! On one of his treks he brought back a wonderful Tassie Devil oven mit 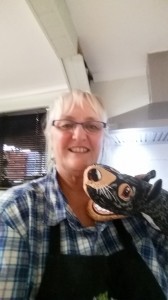 Barb and Mike had a short visit right on zucchini Pickle making time . Together with Eric we had lots of fun. 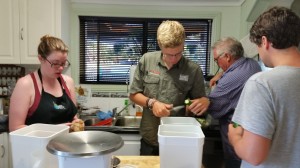 Michaela and Jenny were here for a short time also. Michaela started on clearing the stones from the area we mow and Jenny gave the hen house a coat of paint. 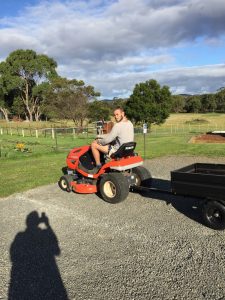 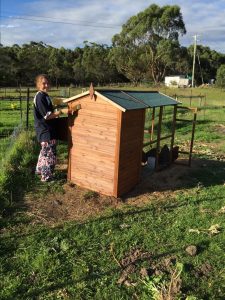 Ren stayed with us for a few weeks. He was a lot of fun to have around. We took advantage of his language skills to get him to translate our menu into Chinese . Ice Cream 冰淇淋 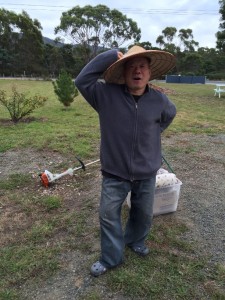 He took over the garden from Eric who left for the next leg in his travels. 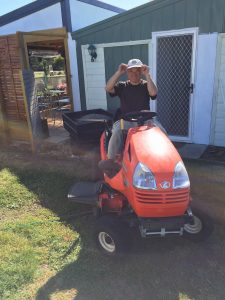 Before Eric left he tried to explain how to hitch hike. Ren decided he would try this new found knowledge to get to Hobart by sitting on the verandah – a picture tells a thousand words lol! 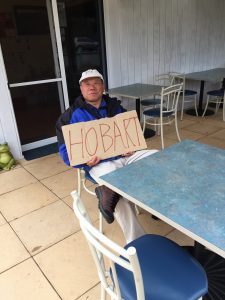 He ended up catching the bus!

We have finally completed our application to put the new solar water pump on crown land. It involved a lot of paperwork and photos of the pipeline and where the pump would be situated on the river bank. 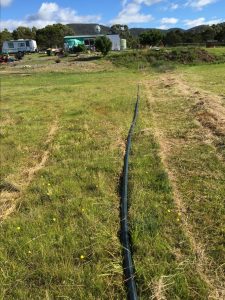 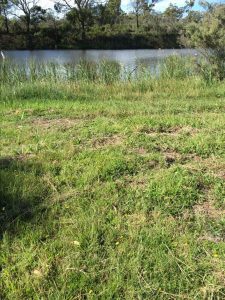 With winter approaching we decided to add more blinds and an outdoor heater. We have had a few cool, wet days and so have had a chance to see how it works. Some evenings we have had it on for “happy hour” and it has been good. 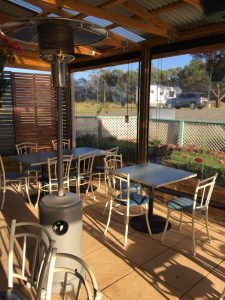 After the cherries finished we changed our sign on the road to “Devonshire tea”. It has proved very popular. 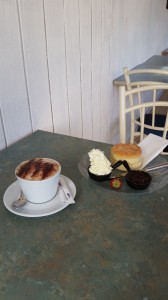 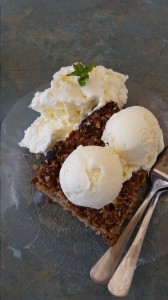 and a Spinach and Feta Muffin. 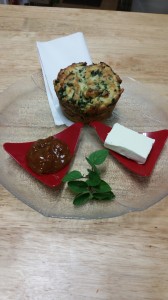 The cyclist are continuing to drop in. So we have installed a bike stand for them. It was a joint effort putting it together. 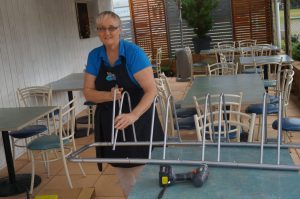 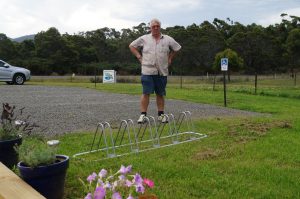 This one was a tandem bike. 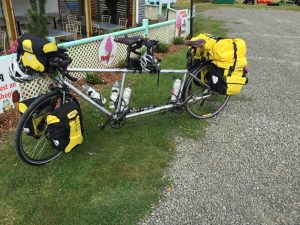 The weather has been variable and given us some wonderful sunrises and sunsets. 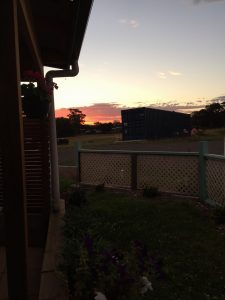 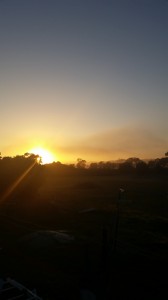 However we have had some glorious days also 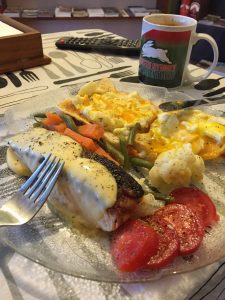 We also got to enjoy a crayfish during the season . 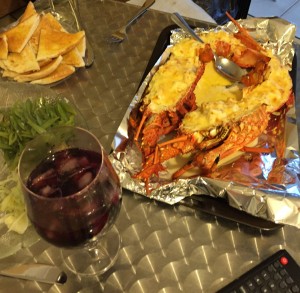 Due to the situation with the corona virus and the regulations now in place we have decided to implement the following – Take away menu including as much of our regular menu as possible plus our chocolate coated ice creams and cup. We are open 7 days a week. Our trading hours are from 8am until 5pm  until further notice.

We are located at 16494 Tasman Highway, via Bicheno TAS 400 m from the Coles Bay turn off on the south side. Approximately 2 hours drive from Hobart or Launceston.

Once again we will be at the Festival with our famous Chocolate Coated Berry Blend Icecreams. This year’s Festival will be held Saturday, 16th November with close to 40 Food and Beverage producers and providers from the East Coast of Tasmania booked to attend. Once again, the music program will be first class and, along […]

We are very excited here at The Pondering Frog as we are now officially a Tearoom with an RV Stop Over! Now the fun begins! As we will be doing major building from now on we decided to buy a second container as a site office and store room. It arrived on the back of […]

Spring is in the air and the weather has been magnificent. We are back in our Queensland gear – shorts and Polo shirts! The new zoning has final come into effect so we have been working hard on getting our Development Application in to Council and approved as soon as possible. Now it is a […]

We offer full Cafe facilities .We have a restroom with disabled and baby change areas available for cafe customer’s convenience.

There is a children’s playground catering to all ages, including a large frog slide.

Our goat are very friendly and love to be pated while the alpaca keeps a watchful eye.

We have an RV Stop Over Area at The Pondering Frog Cafe Ice Creamery for RV’s that are fully self contained – donation box.

We are RV friendly – for caravans, motor homes, boats and buses to park.

.Hop in and check it out.